Delhi Govt. Conferred the Power of Judicial Magistrate on ADMs for trial the cases of Bonded Labour

Bonded Labour is most widely used method to enslave people. People are affected by it badly yet serious thought has not been given by the law implementing agencies, though stringent provisions under India legal system are available. Working in Delhi for rights of the children, AFD-Pratidhi has been doing advocacy for effective implementation of the provisions of legislations pertaining to children.

2.      An offence under this Act may be tried summarily by a Magistrate.

AFD- Pratidhi took up this issue in 2009 and did following interventions:

An RTI was filed on 10.11.2009 with Divisional Commissioner Office, Delhi to get information on compliance of section- 21, of The Bonded Labour System (Abolition) Act, 1976 https://app.box.com/s/2b21p9ygajs9iafcl39e (Link to RTI Application).The RTI was transferred to the District offices and Labour Department. Both the departments were passing the buck on each other and did not provide the relevant information. Therefore, first appeal was filed with the First Appellate Authority (FAA) i.e. Divisional Commissioner (D.C.), Delhi on 31.12.2009, which was further transferred to the 9 District Offices of the Dy. Commissioners (Revenue). District FAAs instructed to PIOs to provide the sought information. Thereafter we started getting replies from the Districts in which we found that the power of Judicial Magistrate was not conferred on any of the Executive Magistrate by the Govt. We followed this issue again by filling another RTI with L.G. Office to know what action has been taken to comply with section- 21, of The Bonded Labour System (Abolition) Act, 1976.

On June 28, 2011, The Hindu took up the issue and did a story namely “Apathy shrouds bonded labour cases”. AFD- Pratidhi’s intervention exerted the pressure on the Govt. to issue the notification in compliance with section- 21 of The Bonded Labour System (Abolition) Act, 1976. On the basis of the story done by Hindu , National Human Rights Commission (NHRC) took suo-moto cognizance and issued a notice to Delhi Govt. on 29.06.2011 “to submit the requisite information/report within 4 weeks from the date of receipt of this notice”. https://app.box.com/s/txrn7m3voybef3xqwh5r (link ot NHRC notice)

On 03.02.2012, Govt. of NCT of Delhi issued notification in compliance with the notice of NHRC and Section 21 of The Bonded Labour System (Abolition) Act, 1976 and conferred the powers of Judicial Magistrates of first class on Additional District Magistrates. Copy of the notification was received under RTI.

The issue again taken up with media and The Hindu did another story namely “NGO alleges no prosecution in bonded labour cases in the country for the past 35 years” on 18.08.2012 to push the Govt. to implement the notification, which was still on paper. Not a single trial was done in compliance with said notification on Section- 21 of The Bonded labour System (Abolition) Act, 1976.

Issuing a notification by the Govt. is a step ahead in the battle against slavery. The implementation of notification is another important issue which is yet to be resolved. We are making our continuous efforts in this direction. 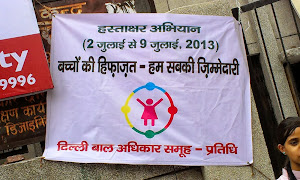